Member of the day on:

Member of the week on:

"My name is Danielle. I'm 16 years old. I'm a very controversial member, but I don't like to talk about it. You can call me Danny, 12, Stasi, Cyan, Sky, Blue, or Bluey. I'm sorry for not being as active. A lot of crazy stuff goes on in my personal life."

God, my family, my friends (both in real life and online), and people who respect me.

The Story of the Fox· 5 games

this member have over 36 games which is the limit of games for here, so here's 12stasia's latest game

The History of 12stasia

12stasia joined Sploder in February 2013 at the age of 10 and her first Sploder friends were Xrayop and Vaxen2.

12stasia went inactive on Sploder after finding roblox.com. YouTube: 12stasia made a YouTube channel where she made Littlest Pet Shop (LPS) videos. LPS are plastic toys made by a toy company under the name of "Hasbro." 12stasia was thinking about making a music video channel and a gaming channel for a while. Her channel name was LpsCandyBar until she changed it in 2018.

12stasia was still an inactive user on Sploder.

Early 2016: 12stasia returned to Sploder from her inactivity after she got bored of playing on roblox.com. Late 2016: 12stasia got banned by Kingoffangdams for helping her best friend, Knee evade his ban. 12stasia was already a controversial member which only made her controversy worse. She left Sploder a week later because she was tired of being the center of drama and she was tired of inappropriate users harassing her. 12stasia was unbanned on October 8th, 2016, but she still did not decide to come back to Sploder and made a game saying she was leaving and changed her avatar to a black/white version of her. 12stasia decided to come back to Sploder in early November. She got a boyfriend in late November named "Gameprinter" and dated for 1 1/2 years.

12stasia got a one week ban in the first week of January for spamming in Sploder Heads. She threatened to leave Sploder because she saw some people praising her ban. She was about to leave, but got unbanned before she was going to leave. In March, she created a new YouTube channel CyanSkyBlue to make gaming videos on. She collaborated with Gameprinter for the first couple months after making it before deciding that she wanted to be a solo individual YouTuber. Nowadays, she posts random videos of her pets on her channel. 12stasia was sexually exploited by "proxycyaniderblx" on September 9th 2017. In early November, 12stasia deleted all of her games because of anger and harassment and because of her rivalry with Rockyroad797. She restored them a few days after deleting them, which is the reason why she lost all of her views.

In March, 12stasia changed her old channel's username from LpsCandyBar to Cyan Greyhound. 12stasia broke up with Gameprinter on May 20th, 2018 after a rough 1 1/2 long years of being together. After their breakup, she became a very inactive member. She and he have cut all contact from each other since then.

The avatar that 12stasia used for the accounts that she used to save. It looks very similar to Sniperwolf8890's avatar. She also has an alt under the name of "privatefox" that has that same avatar. 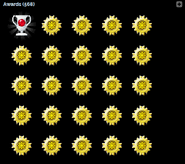 Add a photo to this gallery
Back to top

Retrieved from "https://sploder.fandom.com/wiki/12stasia?oldid=565708"
Community content is available under CC-BY-SA unless otherwise noted.