Awards, on the Mainsite, can be sent out by members who are Level 10+ (or if they happened to be under this level, and an Editor, they would have the ability to send Platinum Awards). Awards can be given out for Respect, Fun, Challenge, etc. When awards are given out, members can then "Accept" or "Decline" them.

Awards are shown with a different tab named "Awards" then in brackets shows you how many the current member has earned.

If a member is banned, they can't send awards to anyone. 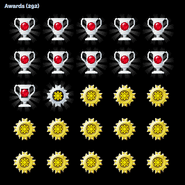 The awards a unknown sploder member got

Unused award. Found on one of star34's games
Add a photo to this gallery
Retrieved from "https://sploder.fandom.com/wiki/Awards?oldid=41756"
Community content is available under CC-BY-SA unless otherwise noted.