Boost Points are a system of virtual coins on Sploder, introduced as part of Evolution of Sploder in July to November of 2014, used to boost games and purchase premium avatars. They are earned by getting views, friending people, beating challenges, and other ways of participating in Sploder.

How do you earn them?

Users achieving the top boost boints for the day are displayed on the Boost Auction page on the Mainsite. 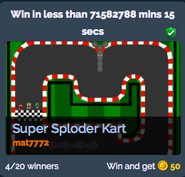 Game Challenges - Winning a challenge, the prize is stated on the bottom right of the Cover of the Challenged Game.

Tournaments: The reward of winning, is given at the bottom right corner of the Tournament Cover. The bottom left tells the status of the tournament.

Users are given the chance to boost their games in the Boost Auction, as high as possible provided you aim to surpass the winner of the challenge. Within the last hour, you can increase your bidding as much as you want. (Moderators can ban boosted games if they do not follow the rules)

For every friend you add or accept, shall you be rewarded 5 boost points. 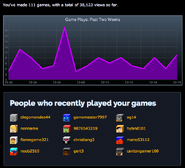 Earning game views and votes, dependent on how much, can give to you some boost points.

Making Challenges & Tournaments involve spending boost points, dependent on how many winners or the prize overall. 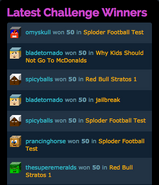 Winning challenges will reward you with certain boost points as stated. 50 Boost Points is the default prize.

You can also earn boost points for winning Tournaments, with 250 Boost Points being the default prize. However, there is only ONE winner.

Leading Boosted Games from the Auction will be given the spotlight on the 'featured games' page. This is replaced and updated by other two leading boost games every twelve to twentyfour hours.

The amount of boost points you have is signified on your pages.
Add a photo to this gallery
Retrieved from "https://sploder.fandom.com/wiki/Boost_Points?oldid=40542"
Community content is available under CC-BY-SA unless otherwise noted.