The Shooter is the first game creator added to Sploder, and was the only creator for the 1st two years of sploder. The Shooter's gameplay is usually oriented around action, puzzles, and (to a lesser extent) exploration.

Another photo of the ship player. 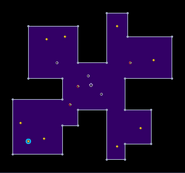 An shooter game that is currently being made

3d Ship Player
Add a photo to this gallery
Retrieved from "https://sploder.fandom.com/wiki/Classic_Shooter_Creator?oldid=43115"
Community content is available under CC-BY-SA unless otherwise noted.