Makever is a Speeder member who joined in 2009 and known as the creator of "Jumpie" and "Cooperators", and also responsible for the List Of Members Of The Day.

"I'm Makever(you can call me Make), I'm a 16 years old boy from Israel who create and play games, Sploder is most fun website I have ever played and I will never leave it! :D"

Working on games and playing games.

The good members on Sploder

"if members will have sceptile intro"

"Even my body is not safe"

* Makever made a game called "The Running Green Hill".

* After long years of unactivity, Makever returns on July and makes some silly games and sends many friend requests in order to get attention on the Main Site.

*After a long development when Makever claims he got sometimes lazy, on December 6th, Makever publishes "Jumpie" in a full version. This is Makever's first featured game (the game was featured by Gerald123 on December 10th). Jumpie raises Makever's popularity on the Main Site and among game makers. Jumpie got more than 1,700 views on the first week and more than 3,000 views on the first month, although it got votes slowly from members. Makever later made the group "Jumpie Fans" for the game's fans. Jumpie has today close to 16,000 views, 242 votes of 4.4 rating and 3 reviews.

* Makever won the "Game of the Year 2014" contest on the Forums by Epicosauruss in PPG category (with Armored Warfare by Netshark) and in overall category. This event has made Makever being active on the forums.

On May 19th, Makever published Cooperators' demo and later signs his game to Epic Game Drop 9 contest as a request from people who enjoyed playing the demo. Cooperators was published on July 9th 2016 for EGD 9 on the last moment and remains unfinsihed since it planned to have 36 levels instead of 28. After Cooperators' release, the game received positive comments by game makers and members by the game's concept that mixes similiar older concepts made on PPG, but many members claimed this game to be slow-paced and laggy for them due the large amount of objects and graphics. Cooperators was taken out of the EGD 9's PPG public vote since Makever asked many people to vote Cooperators, Makever later apologized in a thread and claims he was afraid to lose since Contrast by Opengangs gained more votes in the public vote. Cooperators was the most viewed game before EGD 9's featuring schedule and later was the last on the schedule. Cooperators won 1st place in EGD 9's PPG Bracket, 1st place Amateur Bracket due having less than 2 features at the time, and 2nd place in overall next to Nesting Box by Sto4 (1st place) and Owl Slayer by Bobbler(3rd place). Cooperators was entered succesfully to the Epic Game Library (but it doesn't show up due Geoff who hasn't updated the page), later Owl Slayer entered too after Bobbler was asking for a recount for his game and was jealous of Cooperators' place in EGL. Cooperators has got a small amount of 2,000 views, but has received 55 votes of 4.8 rating that is rarely seen on Sploder, and 2 positive reviews. 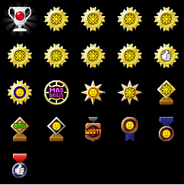 Jumpie
Add a photo to this gallery
Back to top

Retrieved from "https://sploder.fandom.com/wiki/Makever?oldid=41695"
Community content is available under CC-BY-SA unless otherwise noted.