Were you looking for List Of Members Of The Week,' or info about Member Of The Week?

Member Of The Day is a feature on Sploder where members can vote for a member to become the member of the day. Each day a member can nominate 3 members for MoTD and towards the end of the day, members vote for the top 15 most nominated and the one with the most votes win[1]. 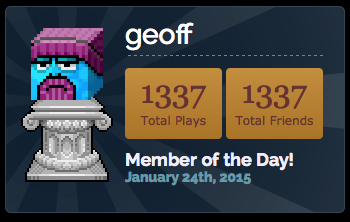 Retrieved from "https://sploder.fandom.com/wiki/Member_of_the_Day?oldid=39883"
Community content is available under CC-BY-SA unless otherwise noted.