The first 3D Adventure game was made by Jomatt99 and it was called "Three First Levels Of The Great War".

The level editing in 3D Mission Game can either be altered with the "generate maze" ability, or in rare cases, you can make each level symmetrical to the other. But it is also possible to make just one level in the creator.The different level areas can be textured with different textures.

In start of each mission, there will be a data screen with the missions chosen name and the character chooser, along with music, a difficulty setting, a graphic design picture of the player and partner if one wanted to have one, (or in case, in a "Save the Scientist" scenario, a single player is not optional.) There are nine different characters to choose from, Case, Flame, Kata, Marshall, Poly, Rand, Sato, Term and Tessla.

The partner and the player character cannot be the same. One mission can contain 9 levels, and each mission one objective. The terminal and the computer core/prison/reactor game objectives don't have to be in the same levels as each other. After entering another level, (if there is one) a return in is possible to previous level by simply going back to the teleporter. For example, getting health powerups that had been left over, and going back, but instead, the health does not re-spawn.

If a player's life is lost and he/she dies, along with the partner, all weapons he/she had will be discarded and will have to be acquired again to achieve. If 3-D mission games are played with No Locks (with no high scores), nothing strange will happen. (Except obviously for the loss of the high scores.) If played with Locks, player will lose possibility to sign onto high scores, as the difficulty will rise, but this cannot be readily confirmed.

If lives are never lost with Locks, player can get onto mission's highscores. After characters being chosen, a complete mission description and choice to play with or without locks comes up. When one of choices being clicked, an intro video will be played and player (and maybe his/her partner) enters the first level. When he/she tries to play but dies 3 times (there is 3 tries after one life being lost), the game will be lost. If one live is lost with locks, player can't get into the mission's highscores.

If the player exits within the exit pod/teleporter from the last level before succeeding his/her objective, he/she will lose the game. If the player completes the objective, and enters the exit pod the mission was became successful. In each case and end video will be played and the highscores dialog comes up in the form of "Nice to have you back in one piece."

The 3D Mission Creator has an optional storyline consisting of 4 alternate missions, each with a different concept.

All of them involve a terminal, in which you need in order to place any of these game objectives. The fourth one involves a simple plot of "Hit and Run" where you race to the finish. The "Hit and Run" mission is a simple mission in which the Player has to complete the game by going to the end of the level.

Everyone of the mission choices however, are meant to have the same "Super-Spy" feel to it for each one, intended so to when someone plays one of its games. The 3-D Mission game creator has many features to it that enables you to add items, enemies, blocks, puzzles, obstacles, and even recreational elements such as entertainment, challenge and action to your game. Here are all of the following:

An simple object that takes up one block of space (1x) on the map. Can be used to limit and block areas.

A diamond-shaped object whose uses are identical and can be used like a cube. The exception is that it is smaller and can fit in the middle of a 3x3 room ({}{}{}x{}{}{}) without replacing any of the previous blocks.

A movable obstacle that can be moved if pushed against in open spaces. It cannot block bullets.

A wall that rotates on it's own and cannot be stopped by anything.

The enemy and player can both move and stop this wall from rotating.

Practically same as the Square Column, but the only difference is that it is an octagon in shape and has lights on it

Placed anywhere and all producing light will emit from all sides.

A small column that produces light.

Can only be placed on the wall area. Produces light on one side.

An obstacle that does not move. Acts as a cube, except for the sci-fi feature on top of it.

A copy of the Round-Column, except it is white in color.

An object that does not moved when placed. Another object that copies the ability of the cube, except it is possible to get stuck with the controls if you have started a game in between 4 of them, and made a glitch to get out.

Game Objectives are optional in a 3-D Mission game. If you do not choose one of them, the game objective will merely be replaced with a "Hit-and-Run" scenario.

A must have for the 3 main game objectives. This is used in the game to hack into the enemies servers and download secret codes for whatever the chosen game objective is. In order to use the Terminal, you must have one of the following:

The enemy in the game with the "Reactor" has a special reactor that in the game, is not fully explained of how it functions, but the player must access a terminal to destroy it and get out alive, defeating the enemy and winning the game before time runs out!

In the "Rescue the Scientist" scenario, you go alone to rescue a scientist from the prison in which the enemy is containing him. After using the terminal to free him, you must escape alive with the scientist in order to win.

The 3-D Mission games use the Doors and Triggers to further increase the "Super-spy" feel to the game, as well as introducing the puzzles and traps needed to make an adequate game.

A door that can simply be opened and closed by touching it.

Just like the Maze Door, except you must solve a Matrix number puzzle to pass if you play with the "Locks- On."

Just like the Maze Door, except you must solve a Letter puzzle to pass if you play with the "Lock's-On."

Just like the Maze Door, except you must solve a Shapes puzzle to pass if you play with the "Locks-On."

If you look at it, it can show the map of the level you are currently on.

A message appears in letters below on the screen if the player walks on it. The creator types in words for what the message may say.

The Inscription has the same effect as the Message, except the player must go into a certain wall in which the inscription is placed in order to read it.

The Apparition, like the Inscription, has the same effect as the message, but instead of the words at the bottom of the screen that appear if walked on, a mysterious old man with a spear comes out as a hologram and it seems as if he is talking to you.

An in-destructable barrier that can only disappear when a certain switch is pressed.

The right switch will either open up or close the wall of the same color.

Power-ups are essential to all action games for their playability to have games be entertaining, as well as to see a more improved version of a weapon, which satisfies many players.

There are two types of health:

Cookies appear after your enemy is killed. They heal your life/energy bar by 5%.

Health-packs come individually, and can heal your life/energy bar by 15-20%.

The atomic is shaped like a orange-nuclear symbol that if equipped upon touch, your firepower increases by 3x and you and your partners bodies become bright red for a limited time.

When equipped upon touch, you and your partner become invisible to enemies for a limited time, becoming immune to conveyors, and enemy attacks.

When equipped upon touch, it makes you and your partner invincible to all damages for a limited amount of time. (colored yellow.)

A weapon similar to shooter game's SHIP ray, (but in this case, it is colored red.) and it can be used for an unlimited amount of time and has a moderate reach.

A weapon identical to the Disruptor in the shooter/robot games, it can stun enemies for a limited amount of time and damage them, It can also stun doors to make them feel almost like a locked door.

A weapon identical to the bombs thrown by the robot player in the robot game creator, the RPG throws mine-like grenades and explodes a while after being shot out. The grenades also bounce off of hard objects.

All games must have at least one enemy or hazard, or else there is no challenge. Here are all of the enemies and hazards present in the 3-D Mission game creator.

The Lizardman is the weakest of the enemies of the 3-D Mission games, but not the one with the least health. Lizardmen have 45-50% of your health and each of the fireballs they shoot at you does 5% damage for each blast.

The Dragonmen have 60-65% of your health and the lightning bolts they attack you with (similar to the tanks in the shooter game creator.) do 10% to you every 2 seconds.

The BeefTroll uses a shotgun to attack (similar to Term's weapon choice.) and it damages you 10% per shot. BeefTrolls have 70-80% of your health.

PoBoT's have 90-95% of your health and use red fireballs to hurt you, which decreases your life/energy by 15% per blast.

The strongest of the enemies, the ArmorBot uses large red blasts to attack you, which decreases your life/energy bar by 20-25%. It has 120% of your health.

The drone has the weakest health out of any other enemy. A drone attacks like a land-mine. If you step on a certain location, it appears and attacks you with lasers that decrease your health by 15% per blast. A Drone has 15% of your health.

A barrel will explode if you shoot at it long enough. The fumes it makes after exploding cause lag in the creator, and the explosion can decrease your health by 5-10% depending on how close you are to the explosion.

If an enemy touches here, their life/energy if increased 10-60% per second, depending on the enemy.

An electrical hazard that switches on and off. Being caught in this can decrease your health by 40% for a whole dose.

An incredibly dangerous hazard which depletes your life/energy bar by 60% each second you stand in it.

If placed on a certain wall, it gravitates you toward it, damaging you in the process, 5% per second,

Slime does not do any damage, it merely slows you down when walked upon.

Like the Slime, it does not hurt, but it still has potential as a threat. The conveyor pushes you in a single direction, or when there are multiples, or conveyors into single lines, it is impossible to escape which direction they are pushing you in. 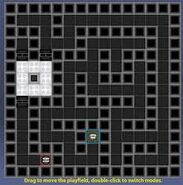 A map in the creator.

The main menu in tiny version. 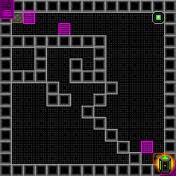 Another map in the creator. 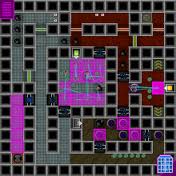 Another map in the creator.

Glitch: Objects outside of playfield
Add a photo to this gallery
Retrieved from "https://sploder.fandom.com/wiki/The_Algorithm_Crew?oldid=43683"
Community content is available under CC-BY-SA unless otherwise noted.